Francisc Rainer and the birth of anthropology in Romania

Francisc Rainer is the first man to teach a university course in anthropology in Romania and a precursor of this field in this country.

The holistic study of human activities has been a lofty aim for generations of scientists and men of culture who wanted to overcome the boundaries of theoretical science and everyday life. Thus appeared anthropology in the late 19th, early 20th century, a science aiming to be more than any other science before it. Anthropology studies humans, their behaviour, mentality, as well as social and cultural life. 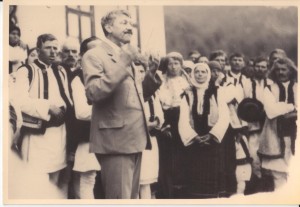 In Romania, anthropology was represented among others by Francisc Iosif Rainer, an ethnic German physician from Bukovina, where he was brought at the age of one by his parents in 1875. He taught at the universities of Iasi and Bucharest, and he was the staunchest promoter of anthropology until his death in 1944. Rainer tried to integrate medical science in comparative cultural studies, and was the first to teach a university course in anthropology. Rainer tried to build a school of thought for future physicians, with specialty studies offset by solid general knowledge. For instance, in his anatomy course, Rainer used ancient statues or medieval paintings to showcase the beauty of the human body and its representations. He blended the teaching of science with teaching appreciation for the arts. Historian Adrian Majuru, Rainer’s biographer, told us about the erudite physician’s creativity.

Adrian Majuru: “What was new in Francisc Rainer’s contribution? In 1937, Bucharest hosted an international anthropology, archaeology and prehistoric studies congress. On that occasion, Francisc Rainer managed to open the first anthropology institute in Romania. His research method was interdisciplinary, and he was a university professor who introduced culture in an anatomy course. One should not separate biology from culture in the attempt to understand human nature. Why is this perspective important? For each profession, from corporate to liberal, anything to do with humans, takes knowledge that shapes that profession. Francisc Rainer brought something new in anatomy, saying that anatomy is the study of living humans, of humans in motion. Man in motion is a living being, in a limited framework defined by time, which evolves from birth to death.”

One of the scientific points of attraction in the period when anthropology flourished was eugenics, which had a different aim than anthropology, that of improving human genes, trying to improve the human condition. Many physicians were involved in the eugenics project, turning it from a scientific endeavour into a way of legitimising cultural and racial superiority. Francisc Rainer was tempted by eugenics, but kept away from it because of its ideological component, as Adrian Majuru told us:

Adrian Majuru: “He generally stayed away from any methodology, let’s say scientific, embraced by right wing ideological dogmas. He was a leftist without being politically involved. Eugenics never was a part of his sphere of concerns with practical or theoretical application.”

In spite of his rationalist concerns and political convictions, Rainer believed in man’s relationship to the divine. He was not an agnostic, like most physicians or socialists, but believed that the metaphysical side of man has a connection to the physical, says Adrian Majuru.

Adrian Majuru: “He developed an interesting element, which can be summarized as follows: man can make a bridge to the godhead through knowledge and culture. Rainer was rather leery with respect to divinity. He said that modern man no longer pays attention to the inner man, he eats, enjoys himself, consumes. He was talking about the late 1930s. Modern man no longer has a grasp of the inner man, which we all have until we die, sometimes without ever getting to know him, until the day we die. This inner man, this alter ego, may bridge that gap, and makes knowledge possible. The other man deals with the practical side of things. We are not necessarily doubled, but we have a soul and a spirit. Rainer was very concerned with what happens to spirit after death. What he knew for sure about the soul is that it would free itself and have a very clear path, but he didn’t know what happens to it.”

Francisc Iosif Rainer’s method of offering the individual a wide cultural horizon was his attempt of finding answers to life’s questions. For the man of the 20th century, who believed it was free of the limitations of previous eras, scientific authority was the most important of all.